Blepharitis is a chronic, inflammatory disease of the eyelids caused by an overgrowth of normal bacteria living along the lid and the base of the eyelashes. Anyone can get blepharitis at any age, but the prevalence increases with age, since as we get older, we make fewer natural antibodies in our tears.

The sugary biofilm allows even more bacteria to flourish, not only causing a multitude of irritating Symptoms, but eventually chronic inflammation, due to the inflammatory nature of exotoxins. The inflammation, in turn, adversely affects all of the structures in the eyelid, namely, the tear glands.

Constant eye irritation, foreign body sensation and chronic dry eye disease are the end result if not treated. Now, thanks to BlephEx, your doctor can directly clean and exfoliate your eyelids and lashes, and remove the biofilm, which will almost immediately improve your symptoms and help control the long-term damage to your tear glands.

What are the symptoms of blepharitis?

The common symptoms of blepharitis are:

What are the traditional treatments?

The traditional treatment is for the patient to scrub the eyelid margins with baby shampoo on a cotton swab or one of the commercially available lid care products squirted on a fingertip. This can be a difficult procedure to perform at home and has limited effectiveness.

Stage 3: Lacrimal involvement leads to aqueous insufficiency with little to no tear lake.

Stage 4: Chronic inflammation leads to a breakdown in the structural .integrity of the eyelid leading to lid laxity, entropion, and ectropion.

Fortunately, there is a revolutionary new treatment for blepharitis. Developed by a board certified ophthalmologist, BlephEx® is an in-office procedure performed directly by your eye care provider. With the BlephEx® procedure your doctor can now take an active role in treating blepharitis instead of simply relying on your ability to perform semi-effective home lid scrubs.

How is BlephEx® different?

With BlephEx® the doctor thoroughly and precisely eliminates the scurf and bacterial debris and biofilm that builds up along the lid margin. These are the main causes of inflammatory lid disease.

Properly performed, BlephEx® will reduce or alleviate these chronic and debilitating symptoms. Treatments are typically repeated at regular monthly intervals depending on severity of the disease.

By eliminating the inflammatory etiology of blepharitis, the overall health of the eyelid is improved. Patients can then begin to produce more of their own tears and finally enjoy a life free from the chronic and irritating symptoms associated with blepharitis and its subsequent dry eye disease.

Am I at risk of blepharitis?

According to a study conducted in 2009, “most ophthalmologists and optometrists report that blepharitis is commonly seen in their clinical practice in 37% and 47% of their patients, respectively, and it is widely agreed that the meibomian gland dysfunction caused by blepharitis is the most common cause of evaporative dry eye disease”.

Is the BlephEx® treatment covered by insurance?

While BlephEx® is not currently covered by insurance, it is a very affordable procedure, especially when compared to the long term Costs of dry eye treatment, which averages $800/yr. If you have blepharitis, you will not only save the hundreds of dollars spent on artificial tears, Cyclosporines, antibiotics and antiinflammatories, but for the first time, will actually enjoy the benefits of an effective treatment.

Blepharitis can be referred to as the grandfather of all eyelid diseases. It is widely responsible for symptoms ranging from itching, a need to constantly rub the eyes, a film over vision, fluctuating vision, redness to severe dry eye disease.

BlephEx is a new, in-office procedure that allows your eye doctor to treat blepharitis by eliminating the biofilm and bacterial toxins that cause inflammatory lid disease and dry eye, and improving the overall health of the eyelid.

Over 82 million people in the U.S. are affected by blepharitis

If you have tired, itchy, burning or dry eyes you could be one of the millions.

**Closed every third Thursday of each month at noon. 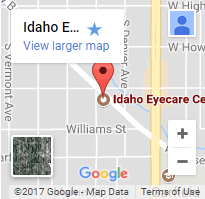